Join the forum, it's quick and easy
Welcome to Intellivision Online! A dedicated Intellivision forum for classic and new Intellivision fans.
Would you like to react to this message? Create an account in a few clicks or log in to continue.

Bookmark and share the address of on your social bookmarking website
Who is online?
In total there is 1 user online :: 0 Registered, 0 Hidden and 1 Guest :: 3 Bots

You are not connected. Please login or register

So, I am organizing an Intellivision gaming party at my house.  It would be a dream of probably all of us to have a room full of INTV gamers that can compete on a high level on dozens of games.  In my case, it'd be nice to have one more person that can compete on any level that actually wants to play with me.

Anyway, I am organizing this party with mostly people that are "new" to Intellivision. I have four systems including 2 Flashbacks.  So theoretically, we could play the same game on all systems at the same time.

What games would be best:

2. ...for a INTV TOURNAMENT either at the end of the night or at a second gathering.

Thanks for your input.

My nephews who are in high school and college now have enjoyed Snafu since they were about 6 or so. They used to crack up so hard when they played. The three of them and I used to grapple over who got the controllers next.

I've got one copy of Super Chef BT. That will surely be a crowd pleaser.

If you know the audience, you can decide ahead what type of games to go for.  If they were Football junkies for example, they might enjoy the original NFL Football with the Playbooks.  Or maybe if they were D&D fans, let two of them at a time take a crack at Swords & Serpents.

I designed FUBAR with the intention of having a multiplayer party game for Intellivision, so I would personally go with that, along with Ultimate Pong and Super Soccer for starters.

For simple arcade-style fun for two players, among the third-party titles there are Demon Attack, River Raid, and Beamrider.  For Mattel games, you can't go wrong with Triple Action, SNAFU, Shark Shark, or even Sharp Shot (Space Gunner).

The arcade ports should need little mention.  Burgertime would be my first pick, and then Lock & Chase, Bump & Jump, Pac-Man, Dig Dug, Ladybug, Frogger, Q*Bert, and then Venture. Maybe Commando as well. 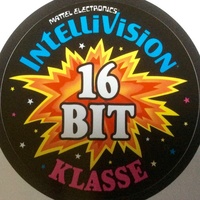 intylab wrote:Paddle Party was an Elektronite release I believe.  That's why I left that out, along with DIIK.  Their tagline "Quality games for your Intellivision" is no joke.  Any of their other titles are good as well: Hover Bovver, Steamroller, Miner 2049er, Boulderdash, Old School, and any of the Koi Magazine titles.  I would possibly leave out Defender of the Crown if the target audience isn't familiar with it.

I mentioned Air Hockey because it's a real party multiplayer gem.

If you have an ECS and enough controllers try the 4 player games for Intellivision: World Cup Soccer, Fubar and Pong 4 from Ultimate Pong.